Joseph A. Hayden, Jr.’s legal career spans over five decades. Most recently, Joe was awarded the 2020 Daniel J. O'Hern Award by the New Jersey Commission on Professionalism in the Law. Click here to view the video of Joe’s remarks accepting this award. To learn more about Joe Hayden's background and experience in his own words, click here to listen to "50-year Career as a Criminal Law Attorney" on The Bold Sidebar Podcast.

Joe began his legal career as a law clerk to the Chief Justice of the New Jersey Supreme Court, and was then appointed deputy attorney general in the Organized Crime and Special Prosecution Section of the Division of Criminal Justice. As deputy attorney general, Joe tried the first wiretap case brought by the state of New Jersey. An esteemed leader of the criminal defense bar, Joe was the founder and first president of the Association of Criminal Defense Lawyers of New Jersey (ACDLNJ), in 1985.

Joe has received accolades and honors for his excellence in trial work. He received the Lawrence A. Whipple Award for Professional Excellence from the ACDLNJ, and, in 2011, received the Rutgers University School of Law-Newark’s Distinguished Alumnus Award. In 2004, Joe was named Professional Lawyer of the Year in the area of Criminal Law by the New Jersey Commission on Professionalism in the Law. He is also the recipient of the Trial Bar Award for Professional Excellence from the Trial Attorneys of New Jersey, an organization of civil litigators. In 2014, Joe received the coveted Justice William J. Brennan Award from the Association of the Federal Bar of New Jersey, in recognition of his contributions to the profession.

Although criminal defense is a significant part of Joe’s practice, he has also been substantially involved in complex civil litigation in state and federal courts, serving as either trial counsel or local counsel. In Joe's view, a trial is a trial – whether it involves a civil or criminal matter. While he relishes his work on complex, high-profile trials, Joe has said that some of his most significant victories were those in which a client was being investigated for wrongdoing but, thanks to his representation, was never charged or civil litigation was never brought.

Joe frequently tries cases that attract national and regional media coverage. He tried the first case in New Jersey with live television coverage by a major network and has tried four other cases with live TV cameras in the courtroom. He has been involved in such high-profile cases as the trial of a former professional basketball star and successfully represented a former Bergen County Democratic Chairman in a federal prosecution. In addition, Joe and the firm were appointed special counsel to the General Assembly in connection with the Legislative Select Oversight Committee, which conducted an extensive investigation of the hiring practices of the transition and office of Governor Philip Murphy arising out of allegations of sexual assault during the campaign.

A lecturer to the bench and bar on the topic of advocacy and trial techniques in high-profile cases, Joe is often asked to provide analysis of legal issues in print, online and broadcast media nationwide. He serves as a trustee for the New Jersey Reentry Services Commission, which provides support services for incarcerated persons, and as a member of the Board of Trustees of the Integrity House, a prominent New Jersey addiction and mental health treatment facility based in Newark, New Jersey. Joe was profiled on PolitickerNJ.com for his involvement from the 1960s to the present in the civil rights movement and the Selma to Montgomery march in 1965.

Joe enjoys movies and theater. He has been active in athletics all his life as a football player in high school and in his first year at Boston College, and regularly played in football and basketball leagues for many years. He has run more than 10 marathons and works out religiously for one hour a day. 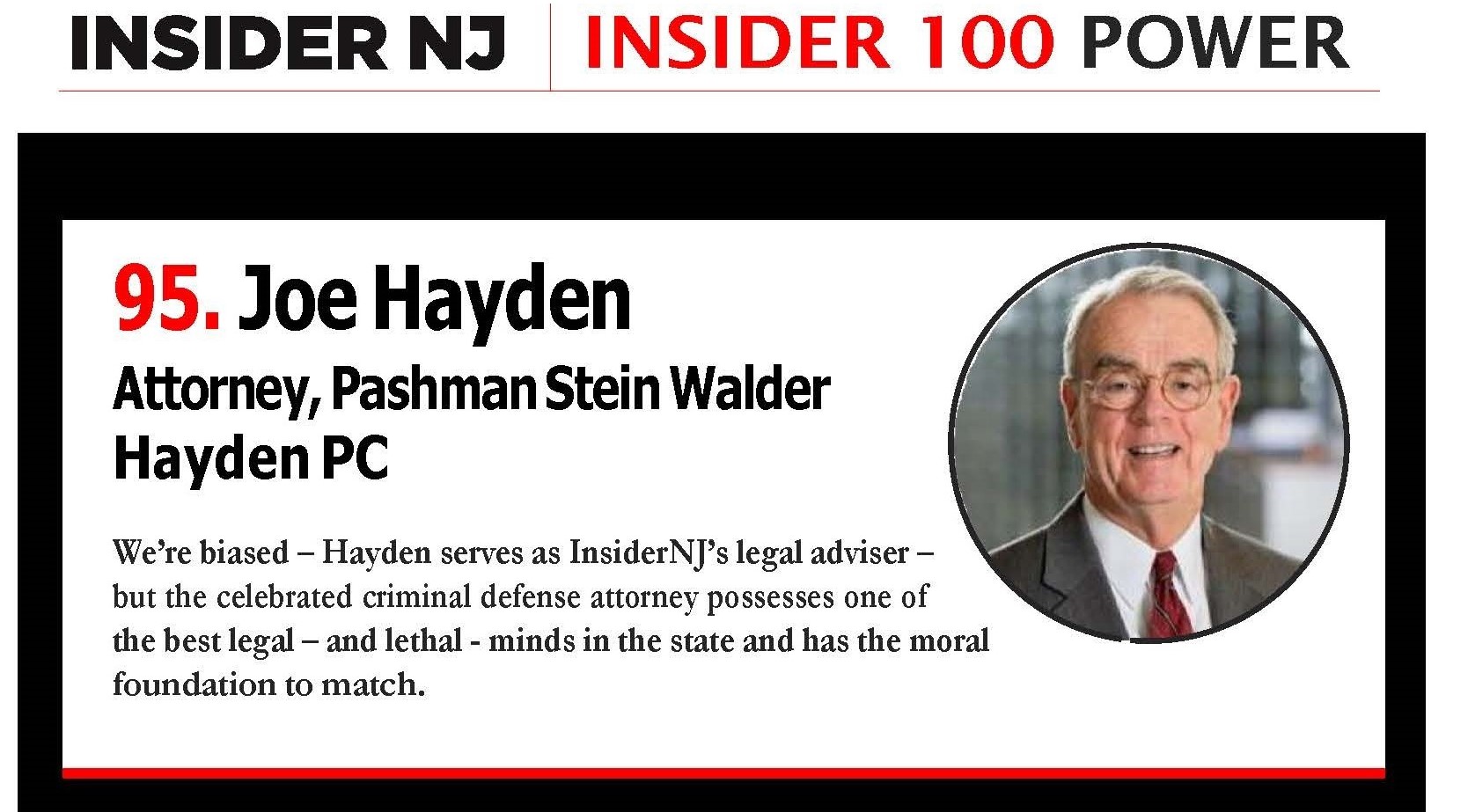 "He does a brilliant job of molding a team that is deep and experienced, and understands how to work together." "He has been at the top of the white-collar game in New Jersey for a while." "He is the dean of the defense Bar in New Jersey. He gets way down to the granular level of a case and his mantra is that you have to know the facts of the case better than the prosecutor.  He gets in the weeds and has mastery of all the details."

Our firm is proud of the results it has achieved for clients, some of which are noted here.  Of course, each legal matter is unique on many levels, and past successes are not a guarantee of results in any other pending or future matters.

The Super Lawyers list is issued by Thomson Reuters. A description of the selection methodology can be found at http://www.superlawyers.com/about/selection_process.html.

The Best Lawyers list is issued by Woodward/White, Inc. A description of the selection methodology can be found at https://www.bestlawyers.com/About/MethodologyBasic.aspx.

The Chambers USA ranking list is published by Chambers & Partners. A description of the selection methodology can be found at https://chambers.com/about-us/methodology.

No aspect of this advertisement has been approved by the Supreme Court of New Jersey.